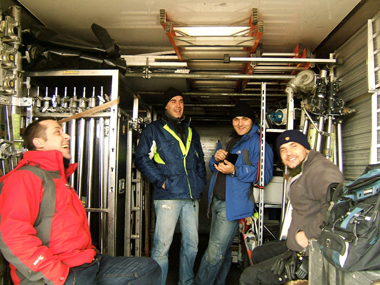 Last February Widescope Productions produced a spot of visa directed by Joaquin Baca-Asay. Joaquin Baca-Asay has been best known for his role as director of photography on such films as “Two lovers” or “We own the Night,” both directed by James Gray. Now jump to directing with a film in pre-production process called “Dirty White Boy”, premiere in 2013. The spot of Visa has been photographed by Paul Daley, that has workes as a gaffer in films like “Syriana” and “Eternal Sunshine of the spotlees mind”. As right hand had Javier Catalan, a renowned Gaffer that we are mesmerized. Zeferino, professional lighting rental company, provided the light required for the project.